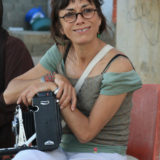 It is through photography, then video then cinema that Valérie Jouve develops a reflection on the relationship between man and city initiated by sociology and ethnology studies. Her work involves human representation on the abstract and impersonal background of the present day city; a city of housing settlements and of great architectural density, of extensive traffic ways and outskirts saturated by constructions, where nature barely manages to survive. Modernity’s archetypal space, this city is simultaneously the landscape, theatre and environment which, for Valérie Jouve, questions existence not by following the formalism of depiction but from the angle of a social phenomenology. The individual is shown here as an anonymous character, without any expression or personality, often viewed from the back, like a passive onlooker, halted in motion, or the face frozen by the indecipherable mask of a mysterious inner nature.

Valérie Jouve’s practice is in keeping with the tradition of documentary photography, a gender of a social nature that emerged in the United States during the 1930s, seeking the balance between the objectivity of description and the aesthetics of neutrality. Her photographs rely on the complex tension between time and space. Far from being simple snapshots, they result from long protocols of exposure of the subject and from a treatment by photomontage. They play on the temporal stretching of the gesture, on the crushing of shots into the background and on their shifting, inducing a lateral doubling over of the vision’s perspective space. They bring the human being back to the surface, setting his presence – even his presence in the world – against the suspended space that he seems to inhabit, somewhere between the reflections of the glass walls on the metropolis’s buildings. Valérie Jouve’s current passage into film and the moving image, but also into polyptychs and collage leaning towards abstraction, is a coherent development which seems to be intrinsically in keeping with her photographs.

More about the artist :
http://www.valeriejouve.com/