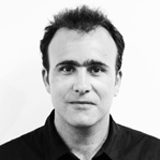 For Henri James, the secret of his work was held hidden in the plot of the stories and the scrolls of the pattern. In the same way, Samuel Rousseau has often concealed his subjects within the staging of his works, where the object, technology and space combine apparently simple images but which hide “secrets” that the visitor enjoys unravelling. In a certain number of his video and digital productions, the images do indeed collect together there where we least expect them to be, hidden in decorative patterns (Papiers peints vidéo, 2003), embedded in enigmatic objects, discreetly agitating the reliefs of object-screens that they cover like a skin. Frequently, they are the setting for bodies ill-adapted to the space attempting to contain them, usually in a humorous, sometimes moving and often poetic manner. Much too big for the building that houses it (Le Géant, 2003), tiny in the generative and devouring city of Plastikcity (2005) and the Persian carpet of Jardins nomades (2007), or reduced to the dimension of a cell in the medicinal blisters of Chemical House, (2009-2010), the body alone or multiplied animates the images with almost Brownian movements and insinuates itself into every nook and cranny, occupying all sorts of spaces, objects or buildings that are huge or too small or off-scale.

A life force traverses the great majority of Samuel Rousseau’s works: the living manifest themselves just as much in the random swarming or channelled agitation of little silhouettes in wide open spaces, as in the organic growths on a body wanting to free itself from a constricting space (Maternaprima, 2006, Le Géant). Whatever the case, the isolated body and the body in numbers have a hard time finding their place in an industrial and standardized world, most often ill-adapted to their condition. The human condition, a universal question, is evoked by the artist as an attempt, endlessly begun over and over again, to struggle out of the box – the object, the building, the city or the megalopolis – which wants to suppress it and fix it, in order to push back the walls and open it onto an unprecedented and infinitely imaginary world.

Samuel Rousseau is an artist who invents shapes and explores their capacity to produce the poetic. Wearing down diverse materials, recuperating objects relegated to the rank of garbage (cans, manhole covers, packaging) and using technology with clockwork precision, he seeks the best adapted technical solutions so that the technique disappears behind the force and the presence of the image produced. These works are then free to evoke the animal world as well as the industrial and urban world or to borrow from science fiction or the imaginary world of cartoons and cinema. They can take a great leap between an evocation of Metropolis or a modern vanity, in echo of Nam June Paik’s TV Bouddha. The creation of an illusion, as fragile as a sigh, somewhere between a real object and a possible image of it: hence an electric flame and digital leaves can also rekindle a snuffed out candle (Un peu d’éternité, 2009) or bring to life the trunk of a bare tree (Sans titre (L’arbre et son ombre), 2008-2009). Yet all of that remains as temporary and fleeting as life itself.

More about the artist :
http://www.samuelrousseau.com