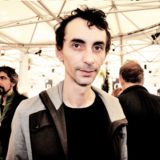 Saâdane Afif escapes as much from artistic classifications and taxonomies as he does from the recognized networks and circuits of diffusion. He deliberately straddles the boundaries between the disciplines, provoking audacious encounters, overlapping the pop culture and the most experimental research, the disco and the museum, the monumental installation as well as domestic handy work. Thus, he positions himself in a territory made accessible by multiple entrances whose coherence is revealed more in a methodology than in a formal repertory. Interconnecting the works, for some time he has adopted the position of artist-curator which allows him to invite his friends into protean proposals, while developing the strategy of an amused cannibal. Delphine Coindet, Mathieu Mercier and Bruno Peinado have lent themselves to this exercise. Very active on the contemporary scene, he shows not only in institutions but also in festivals, magazines or on the radio in France, Berlin, Rotterdam or Mexico.
His work strives to reveal paradoxes, for instance by applying complex issues to seductive objects, by expressing vacuity with excess, or by producing sound analogies with silent objects. In his solo exhibition in the Palais de Tokyo in 2005, the artist displayed a plastic device linked to a musical proposal: lyrics of songs associated with scenic objects, spotlights and a listening room. In the same way, the work Blue-Time – Sun Burst combines objects from the visual repertory of the rock culture but generates a paradoxical shift by displacing them in an exhibition arrangement. This shift can also be found in pages of framed partitions (Vice de forme, première mesure) whose arrangement on the walls evokes the analogical control equipment of music.

More about the artist :
http://www.saadaneafif.com/