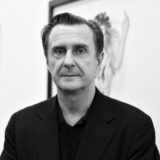 Above all, the sculptor and performer Philippe Ramette is an experimenter who, via the objects that he creates as well as the photographs in which he poses himself, invite the viewer to widen his horizons and develop a distanced vision of the world.
Thus, in his “objects” – prototypes with strange functions –whose use is put to the test by the artist using his own body, we can read the will to combine physical experimentation and a conceptual relationship with the world, as can be seen in Objet à voir le monde en détail (1989) or Point de vue individuel portable (1995).
Following the example of his elder Rebecca Horn, Philippe Ramette employs artificial limbs, harnasses and other such bodily apparatus in order to create a scenography of the new practices involved in his relationship with the world. These instruments, both supportive and restrictive, force the body to contort or even hurt itself in order to produce an image that is un-faked and perfectly unrealistic. The titles play an important role. Indeed, they act in a descriptive, prescriptive or even ironic way. Thus, in Socle rationnel. Hommage à la mafia (2002), Philippe Ramette displays himself as a victim of the Mafia sealed in a block of cement. Ramette’s response to this criminal act wishes itself to be rational; in addition, these are not simple stones but a pedestal that the artist has chosen as a crime object. In Exploration rationnelle des fonds sous-marins : le contact (2006), the artist examines the sea in a technically rudimentary – in appearance – but singularly poetic fashion. Here the accent is put on the scrupulous character of the artist’s investigations; nevertheless, everything is imbued with a strange and surrealistic nature.
Ramette’s photography, which initially was solely an instrument of study, has become little by little – and this thanks to the complicity of the photographer Marc Domage – a way of keeping a trace of the moments when the artist is being put through an ordeal – a way, in fact, of witnessing that there is no barrier either to our body or to our imagination.

More about the artist :
https://www.xippas.com/fr/artists/philippe-ramette/