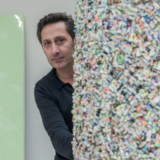 Lives and works in Nice (FR)

Pascal Pinaud is a painter and at the time when he began his work in the 1980s, it was common to approach painting with irony and deconstruction, to such a degree that it seemed to have lost its historical role as maker of the image. So, he threw himself into it under the cover of a strategy: make the practice of painting the continual renewal of an anti-heroic experience, by keeping the painting as archetype and by making the most unexpected processes of realization just so many pretexts for experimentation. By moving painting away from traditional processes and conceptions, he renews its conditions. In particular, the directions of his reflection are the gestures from which he removes all expressive content and that, on the contrary, he conceives as an occurrence and a purely mechanical operation and as the notion of chance: “The visual experience of chance produces a distancing of my reflections on painting. Far from being a critical or theoretical reflection, through these experiences I recharge the gestures of my painting […] It is no longer a question of making a painted image or even a digression around a painted image but of finding the possibility of using my gesture as if it was an accident itself.” This results in an intense practice of great inventiveness in which Pascal Pinaud tests the most unusual procedures and ideas often exterior to the artistic field like possible scenarios for the painting. From the questioning of genders, between abstraction and representation, to the structural questions of the relationship between style and substance or the applying of paint onto the surface, via a questioning of the motif, Pascal Pinaud’s work rests on the practice of the clearing and intellectual and materialist recycling of pictorial ingredients. This playful profusion of gestures is matched with meticulously high standards of realization and the mastery of sophisticated techniques that become a paradoxical qualitative argument commensurate with the excesses and the de-centring movements of his inspiration. He also revisits the hanging, the exhibition and the conditions of visibility of the painting, inviting the public to discover the painting’s potential for illusion.

More about the artist :
http://www.pascalpinaud.org/