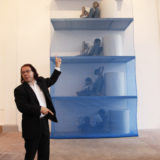 Represented by the galleries Aeroplatics (BE) ; Bartsch (CH)

Olivier Blanckart is an atypical artist whose work, free of any propriety, plays with the rules of good and bad taste. He questions the qualification of the gesture between professionalism and amateurism, all the way to regularly arousing condemnation and exclusion. Autodidactic, he has constructed the singular figure of a pamphleteer specialized in misappropriation and the farcical. Through the languages of photography and sculpture he questions the relationship between reality and representation in order to generate a critique of the artist as modern hero, in a society where conformity and the politically correct triumph.
His first works that he calls “almost objects” are already haphazard sculptures with an ambivalent status between oeuvre and ordinary object, made from poor and left-over materials. During the 1990s, he became more widely known for his photographic self-portraits in which he parodies, thinkers, artists and other famous people from the second half the 20th century. Exaggerating the pose with unconcealed humour, each one of these photographs is, in fact, the pastiche of a well-known photograph or a depiction of the person in question, seen as an avatar of popular culture. Thus the iconography of Joseph Beuys, Guy Debord, Yves Klein or Adolf Hitler, but also that of stars like Chuck Norris or Fabien Barthez, finds itself comparable to a series of icons of press celebrities. Since the end of the 1990s, with his remixes, Olivier Blanckart reinterprets news images using volume. These crudely made sculptures in scotch tape and packing materials, on scale 1, treat as many serious subjects as they do references to the world of art with the same impropriety and the same thrown together approach. Olivier Blanckart calls these works endowed with genuine visual effectiveness “anarchistic objects”, relying on the combination between the palpable misappropriation of the images having served as model and their paltry material