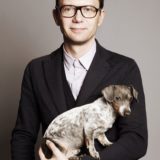 Born in 1970 in Conflans-Sainte-Honorine (FR)

Mathieu Mercier’s work is constructed around the terms of an encounter frequently planned and often postponed: that of art and industry. From the tensions aroused by the beginnings of the machinist era to the synthetic programs of the avant-garde arts, these relations have known periods of rapprochement as well as a successive series of crises, finally ending in the triumph of the normative model of mass distribution. By proposing a new mode for this encounter, Mathieu Mercier questions not only the possibility of an occurrence but also the theoretical positions that have signposted it historically. For the body of his ufactured objects, assemblies of melamine-coated wooden panels or fluorescent neon tubes, is passed through the filter of the history of that much sought after model, the avant-garde: a garden chair is peacefully placed side by side with the famous one by Gerrit Rietveld meaningfully painted in white. Modular shelves from trade are recomposed according to a constructive neo-plastic model which is a way of reconsidering the ready-made without disowning the manufactured object and while ignoring the traditional hierarchies. This approach is a rehabilitation of do-it-yourself which has become an artistic gesture. But this positioning – this is where the essential factor undoubtedly resides – does not deny itself the production of shapes which, at the end of this detailed reading, acquire a certain autonomy. The assemblies and modellings are also sculptures which, once ridden of the critical apparatus surrounding them, can express their singularity. Thus, the work Sans titre (2004), made up of cylinders on a table activated by a machine belt, produces a perpetual movement which animates nothing other than the shapes of the work itself. Pavillon (2001), the unfinished 1/2 scale model of a suburban detached house, remains inaccessible to the public. It frees itself from its obvious reference to constitute an autonomous object, the perception of which is dominated by the coherence of its own shapes and volumes.

Interview of Mathieu Mercier for the Marcel Duchamp Prize, 2003

More about the artist :
http://www.mathieumercier.com/