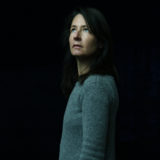 Dominique Gonzalez-Foerster’s works entertain a strong link with the questions pertaining to both literature and the cinema and which are mainly based on the perception of places, mobility and displacement, travel and exoticism. Although her first works mainly strived to study the image of the room, repeated in closed spaces with spare but sensitive fixtures and fittings, it is undoubtedly in order to question a cloistered space rather than the displacement that it suggests and for which it constitutes a stop or a pause… These arrangements made as from 1988 are in fact perceivable as moments, of intervening periods which precede or follow the action and whose subject is its sensitive vacuity. Places of absence where ordinary everyday life is played out, they are relative strangers to us, their spatiality is underlined by indications of contours and volume: all bathing in colourful light, neon lights arranged along the plinths, objects placed on the floor and in the corners. But the very nature of these underlined spaces precisely reveals “the narcissistic fence of individual and superimposed interiors” and invites a necessary escape. A paradoxical place, Milwaukee Room resembles a bedroom with its few objects but the incessant flashing of a neon tube and two wrongly set radio alarm clocks make it inhospitable.
This first group of work was extended as from the mid 1990s into a series of travel photographs and films. Here displacements are also at stake, seeking to be perceived, somewhere between documentary and logbook, the sensation of towns in successions of long tracking shots and sequence shots, accurately linking private universes with public space and reclusion with restless wandering. But according to a movement opposite to that of the “Rooms”, we go from the universal to the particular, these town views revealing the singularity of the eye and the uniqueness of perception.

Interview of Dominique Gonzalez-Foerster for the Marcel Duchamp Prize, 2002

More about the artist :
https://www.dgf5.com/