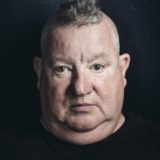 Lives and works between Montreuil (FR) and Pèteloup (FR)

A retrospective look at Claude Lévêque’s work reveals the coherence and the matrix-like dimension of a subject elaborated at length. Simultaneously seductive and anxiety-provoking devices release a tension that inevitably echoes our inner conflicts and what we repress. This powerful structure reappears repeatedly in Lévêque’s work like a series of reminders or persistent visions of a project which then takes on an original character like the Grand Hôtel shown at the Maison des Arts of Créteil in 1982. Because of its theatrical dimension, both reassuring and distressing, this piece does indeed seem to have determined many of the proposals that were to follow. The installation gathered together framed photos of faces of close friends, sometimes wearing makeup, on a table covered with satin where a bouquet of roses has also been placed, all of this encircled by splinters of glass. The other question that constantly runs through Lévêque’s work is undoubtedly the question of childhood. His own childhood, about which some elements provide us with indications without necessarily being of an autobiographical nature, but which also take a resolutely universal turn precisely regenerating that inner conflict which is nothing other than the expression of the impulses of life and death.
Lévêque willingly claims a link with certain artists who are his leading references and singularly marked by the question of the clash of individual and collective memory: Christian Boltanski, Gina Pane, Michel Journiac…The four poster bed in the work Aliéné étendu comes from the repertory of dream and intimacy. But here this intimacy sits alongside madness, since the troubling presence of someone insane is being suggested to us. As for the coloured neon lights inscribing the letters of the word “ether” in a dark room, they proceed from the same association of a familiar element – this time borrowed from advertising but significantly reproducing the approximate written form of a hand – and from another, the word, which refers to the medical world.

More about the artist :
http://claudeleveque.com/en