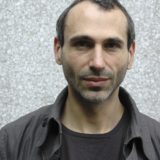 Circulating freely in an immaterial territory posted with the visual signs produced by our western societies, Claude Closky shows us a familiar landscape.
In light of the observation that everything is merchandise, his works make a conceptual detour in order to bring us back to the literal expression of the object that they represent, a singular link between the reflexive method of conceptual art and the deconstruction of the mechanisms of seduction implemented in pop art.
Playing with the inflation of images in order to insinuate himself into the unexpected flaws in the circuits of diffusion – via the internet, television, on urban billboards, in publishers windows, commercial stores or in the institutional network of art – Claude Closky reveals the informative object as a remnant of consumerism which, removed from its destination by repetition, systematic deciphering or the exhibition, poses itself as such, expressing nothing other than the mechanisms that produce it. Thus, the systematic transcription of the text on a packet of cornflakes, the restitution, in wallpaper, of the columns of the Nasdaq stock quotes or the accumulation of televisions producing damaged and modified images of programs televised by thousands of channels, all proceed from this same intention: reporting information in its most literal expression by revealing the alienating mechanisms.
This is a similar procedure to the one we find implemented in Black Gold Silver: the overprinted text which takes the place of the image on bank cards represents nothing other that what they are yet reveals the inanity of the distinctive signs that they pretend to convey. As for the systematic juxtaposition of 32 almost identical photographic views from the same hand (32 mains) – in which the drawing on the nail moves along from one finger to another to create a combination – it exploits, until it signifies nothing, a coding that has become absurd.