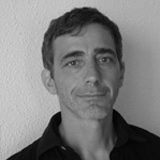 Lives and works in Sète (FR)

Céleste Boursier-Mougenot’s works are set at the intersection between experimental music and the visual arts. A pupil at the Conservatory, member of musical groups and composer for the choreographer and director Pascal Rambert, after this latter experience, in 1994, he decided to go into the field of visual arts. His research led him towards the realization of interacting sound and shape producing environments whose partially controlled combination does, in fact, escape their author. From china dishes clinking together in a swimming pool caused by swirling water generated by a pump (Sans titre, série III, 1999) to a series of vacuum cleaners connected to harmonicas and controlled by electric guitar tuners (Harmonichaos, 2000), the one constant factor in Céleste Boursier-Mougenot’s productions is the generating of a random musicality albeit potentially determined by the tools from which they are formed. Another particularly spectacular work gathers together sparrows and electric guitars connected to amplifiers in a closed space (From Here to Ear, 2008). On contact with the instruments, the birds produce notes which respond or add to those of their own song. The poetry of the encounters made possible by this device specifically comes from the part that is uncontrolled or determined by the autonomous mechanisms of the work. But it also comes from their musical quality. For in addition to the simple production of the sound, the composer’s other preoccupations include the exact study of assemblies, the control of the wavebands and the arrangement and spacing of the object. In the same way, the shapes produced are partially determined by the necessities of the installation. To this is added a participative dimension. Indeed, the onlooker is invited to wander through the installations, to sit down and listen to the music and thus enjoy the experience of an elusive and unique moment of perfection.