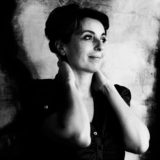 When she received the Marcel Duchamp Prize in 2004, Carole Benzaken admitted she felt a little surprised by this recognition especially as painting, moreover figurative, did not appear then as the most representative medium of contemporary creation. A sharper look at the big colourful canvases that she paints in series (Tulipes, (Lost) Paradise, Travelling), shows us that here it is no longer a question of the representation of reality but more exactly a distancing from it. Indeed, the models which inspire Carole Benzaken (images from advertising, television, newspapers…) are pretexts which enable her to make – through the intervention of painting – a slight shift in perception: the representation of reality is no longer at the core of this work, the main subject is the painting itself. Thus, Carole Benzaken plays with changes in scale (the labels found in mail order catalogues result in paintings more than two metres high) and with framing and juxtaposition (the same tulips are not all presented in the same way, there are “portraits”, diptychs but also more complex assemblies). The duality which is expressed between the blurred and the well-defined, between the near and the far, is such that we leave the banality of an everyday subject to enter into a state of real, almost abstract, pictorial jubilation, largely borrowed from the arts of the time, photography and cinema. “Making cinema in painting”, such is the project of Carole Benzaken who brings a new breath of life to everyday snapshots, like a sports event with Jalabert (1997) or a news item with Diana’s Funeral (1999). The artist, who also practises photo and video, deliberately crossed over the disciplines and refined her artistic approach during her long stay in Los Angeles from 1997 to 2004. At that time, she learnt about jazz, becoming interested in the way the musicians freely improvise on a standard, a method which inspired her to produce a painting free from any strict representation.

More about the artist :
http://www.carolebenzaken.net/biographie.html