Born in 1966
Studied at the Villa Arson in Nice and the Beaux-Arts of Marseille
Lives and works in Paris
Represented by the galerie Art : galerie Art : Concept, Paris

The artist-chemist Michel Blazy records the metamorphosis of materials in his works, their putrefaction and mycological proliferation, allowing the artist to create a work in progress where time and the living interact. Yet it is not so much the scientific observation of organic elements that interests the artist, but rather the problematic issue of the misappropriation of daily consumer products: carrot puree, chocolate chickens, Chinese noodles, etc…More than the experimentation, it is the experience which inspires the artist: more than chemical, his proposal is sociological and subverts the codes of art by giving priority to what is least onerous, ephemeral and ordinary.
In this sense, he is heir to the reflections made in the 1960s by Arte Povera, and notably by Giovanni Anselmo whose Structure qui mange – showing a lettuce tightly encircled in a block of granite – is in resonance with his own work. Refusing the dictates of the object, he is more interested in the processes than in the works.
In La Fontaine de la bonne volonté (1994), the artist has bored a hole in an upside down bucket, then slipped a straw through it along with a little bit of washing up liquid to create the spectacle of a foaming sculpture that is both moving and fragile. A true poem of the transience of life breaks through the caustic criticism of our sterilized universe.
The passing of time, a necessary ingredient in every one of his creations in transition, is all the more full of meaning in works like L’Homme aux oreilles de porc (2005), a human skeleton in the form of a dog biscuit, decked with two pig ears. This reflection on recycling, on the hybrid and the left-overs of our society seems to concur with Lavoisier’s phrase: “Nothing is lost, nothing is created, everything is transformed”. This ironic evocation of death makes this sculpture a memento mori.
In short, once the humoristic dimension of the work is transcended, Michel Blazy’s works also reflect the tragic and absurd dimensions of our human condition. 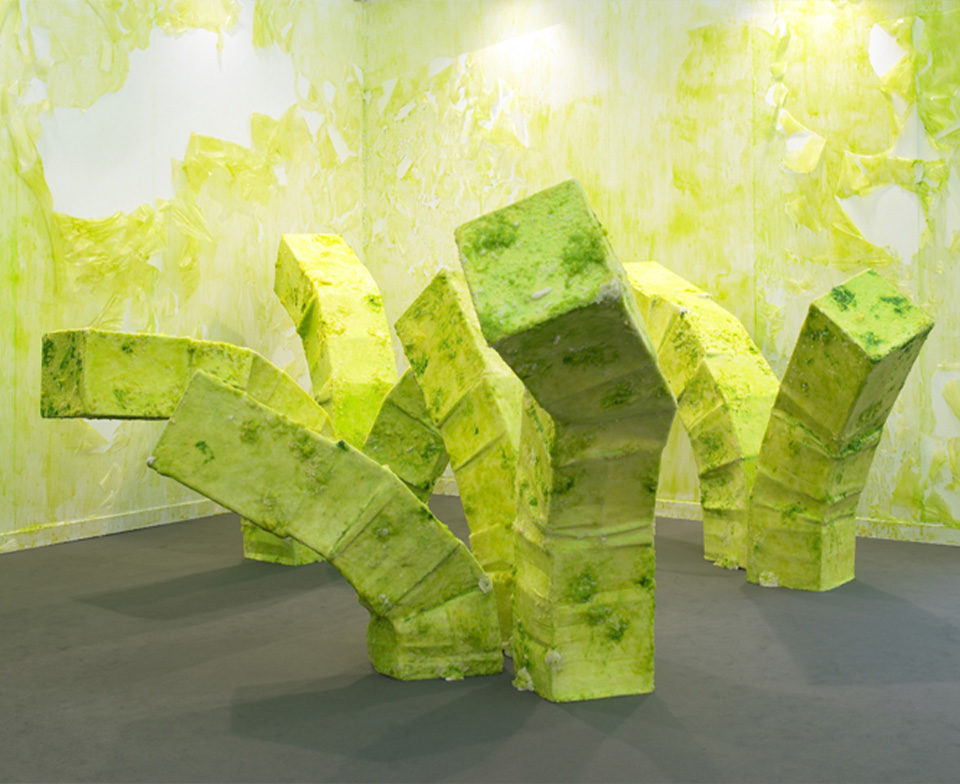