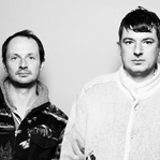 “After long deliberation the jury has chosen Daniel Dewar and Grégory Gicquel, whose work exploring monumental sculpture seemed particularly interesting” announced Alfred Pacquement, President of the jury. “Their use of materials, without excluding the traditional crafts and the fragmentation of volumes, including in the form of animated films, broadens aesthetic standards whereas their themes refer to leisure or to the most popular cultural traditions.”

Three other artists working in the field of the plastic and visual arts were selected for the 12th edition of Marcel Duchamp Prize: Valérie FAVRE (born in 1959), Bertrand LAMARCHE (born in 1966) and Franck SCURTI (born in 1967).

Daniel Dewar and Grégory Gicquel follow after Mircea Cantor, the 2011 winner. They are invited by the Centre Pompidou for a three month solo show in the autumn of 2013 in the 315 space. The ADIAF will give them a financial endowment of 35 000 euros and will participate in the production of the exhibition. The duo of artists is represented by the Loevenbruck Gallery, Paris.

The announcement was made on Saturday, the 20th of October 2012 in Paris at the Grand Palais by Gilles FUCHS, President of the Association for the International Diffusion of French Art (ADIAF) and Alfred PACQUEMENT, Director of the French National Museum of Modern Art, Centre Pompidou and President of the jury in the presence of a very large audience of people.

Organized by FLAX (France Los Angeles eXchange) in partnership with the Palais de Tokyo, Paris, the City of Los Angeles Department of Cultural Affairs and with the guest participation of the ADIAF, the exhibition proposes to re-establish the dialogue between French and Californian artists with thirty or so works from emerging and confirmed artists from France and the West Coast of the United States.

A figure in the new geography of contemporary art and self-styled rootless wanderer, Mircea Cantor creates works – videos, photographs, drawings, sculptures and installations – that are simultaneously poetic, minimal and metaphysical. Mircea Cantor says: “Today, we should be wary of speaking the language of globalization and pandering to global brands. Instead we should be speaking a universal language, which is the very opposite. That is exactly what globalization is destroying.”

Born in 1977 in Oradea in Rumania, Mircea Cantor lives and works in Paris. He is represented by the Yvon Lambert gallery, the Magazzino di arte moderna gallery in Rome and by the Dvir gallery in Tel Aviv

Valérie FAVRE
Born in 1959 at Evillard (Switzerland), French nationality, lived and worked from 1982 to 1998 in Paris, then in Berlin.
Represented by the Jocelyn Wolff Gallery, Paris, the Barbara Thum Gallery, Berlin and the Peter Kilchmann Gallery, Zurich.

Daniel DEWAR and Grégory GICQUEL
Daniel Dewar was born in 1976 in the Forest of Dean (United Kingdom) and Grégory Gicquel in 1975 at Saint Brieuc. Both live and work in Paris
Represented by the Loevenbruck Gallery, Paris

Bertrand LAMARCHE
Born in 1966 in Paris, lives and works in Paris
Represented by the Jérôme Poggi Gallery, Paris and the Septembre Gallery, Berlin

Franck SCURTI
Born in 1967 in Lyon, lives and works in Paris
Represented by the Michel Rein Gallery, Paris

News The 2012 Marcel Duchamp Prize at the Fiac